In 2017, the HCHI Coalition will be focusing on making Nashville a more walkable/bikable community.

Mayor Billy Ray Jones has addressed the participants explaining how the City is in full support of the Growing Healthy Communities initiative including increasing opportunity for physical activity through the built environment. Currently, the City is working on a wonderful sidewalk project that will hopefully be able to link some key areas of the town and make exercise safer for residents.

HCHI brainstormed how local partners can pool resources to make a true impact in the community and identified needed resources and funding.

A bid has been accepted by the Nashville City Council to begin work on a sidewalk project along 4th Street.  Council members during a recent meeting accepted the low bid of $223,548 from Bobo & Bain Construction in Hope.  This project is being largely funded by the state highway department, who will fund eighty percent of the sidewalk installation.  This project also includes the construction of a footbridge over the creek near Wilson Park.  Additional work planned, to include improvements to the intersection of Leslie Street and 4th Street, will be further discussed.  A bid for that work has also been turned in, however the council requested a more detailed cost estimate.  A project start date has not been set, however with school in session Public Works Director Larry Dunaway says they will work in phases as to not interrupt traffic unless necessary. 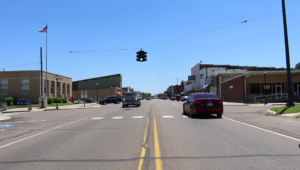 Complete streets are streets for everyone, no matter who they are or how they travel.  By 2025, nearly 1 in 5 Americans will be 65 or older.  About ½ of all non-drivers over the age of 65 would like to get out more often.

States with the lowest levels of biking and walking have, on average, the highest rates of obesity, diabetes, and high blood pressure.  Women who walk or bike 30 minutes a day have a lower risk of breast cancer.  A 30-minute round-trip bicycle commute is associated with better mental health in men. People who live in walkable neighborhoods get more exercise than those who do not.

More than 40% of pedestrian fatalities occur where there is no available crosswalk.

Walk Across Arkansas is an eight week exercise campaign that anyone can join to set personal goals for physical activity. The program is sponsored by the University of Arkansas Cooperative Extension Service and is held each fall and spring.

All you need is a team of two to ten people that can log workouts online. The program allows for walking, running, biking or any other physical activity, as long as you dedicate at least ten minutes per workout. Research recommends that adults should exercise for at least 150 minutes per week and youth for 60 minutes per day.